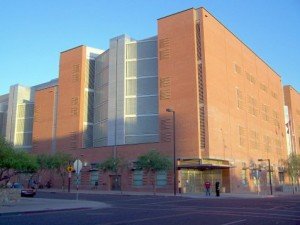 Get your friend or family member out of the Maricopa County Jail with help from our Phoenix bail bonds agents. We service all jails within Maricopa County. Bail bonds in Phoenix, AZ are posted as soon as our transaction with you is completed.

Maricopa County Bail Bonds specializes in posting all types of bail bonds, providing convenient credit card and bank deposit service to our clients; this is particularly convenient if you live out-of-state. We can post all types of Arizona bail bonds; Cash Bonds, Surety Bonds, Deposit Bonds, large or small bonds..

Large or small Phoenix Bail Bonds we can help!

Maricopa County Bail Bonds ™ is not just another Phoenix bail bonds company. We pride ourselves in offering you the kind of service you would expect from a small town company. We take the time necessary to help you understand the Arizona bail bonds process; we don't sell confusion, we sell satisfaction. We learned a long time ago that clients that understand the bail bond process and know their risks up front are more likely to be satisfied. Maricopa County Bail Bonds strives toward establishing strong community ties and relationships with its clients. We can provide mobile service...right to your doorstep if necessary for those individuals unable to meet us at the jail (mileage fees may apply).

Is your friend of family member incarcerated in one of the following Arizona jails? We can get them out fast!

We post bail bonds in Phoenix, Arizona. Bail bondsmen are ready to help you!

We take the worry out of bailing out your friend or loved one from a Maricopa County Jail We know how frustrating and stressful it can be for the family. Let us act as your lifeline. We can handle the entire bail bond process without you needing to leave the comfort of your home or town. All you need is fax or email access. We can post your bond using your real estate, or charging the whole bond on a credit card or by bank deposit

Cash funds may be deposited directly into one of our bank accounts. Confirmation of the deposit can be instantaneous, however, some States may not clear these transactions for up to 24 hours. If you are depositing a large amount of cash and want us to access it immediately, confirm the pending transaction time with the bank prior to deposit. Deposits may be made to one of several major banks.

If none of these banks are available in your area, or if the pending transaction time is longer than you wish to wait, you may wire the funds from your bank to ours. Wired funds take a few hours to process (described below).

Wiring funds from one bank to another is not a difficult process. Wiring of funds is desirable in those instances where none of our banks are available in your area for a direct deposit. If you wish to wire funds to us, we will supply you with a Routing Number, which your bank will use to transmit funds from your bank to ours. Wiring funds may take a few hours before the deposit show up in our account. Late in the day transactions would not be available until the following day. All wired funds must be received and cleared by the bank prior to posting bail. Banks charge a nominal fee for wire transfers.

Bail Bonds for Other Jails